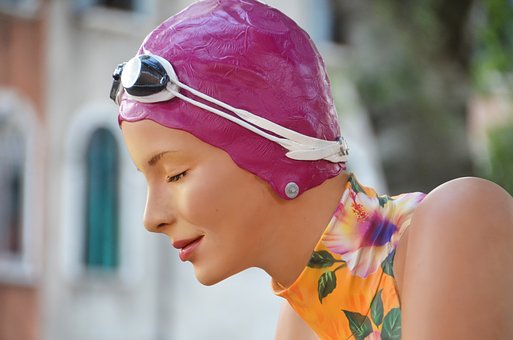 Hey all you water warriors…hats off to stylish swim caps! Did you know that they come in all sorts of
bright, vibrant colors and patterns, and various shapes from full-sized swim caps that cover the ears; to
a shorter, more contemporary looking half cap; to those made specifically to accommodate longer hair;
to retro swim turbans that are higher at the crown of your head? Some have smiley faces, fish or funny
sayings on them….or toothy sharks, sports teams, appliqued flowers, spider webs, rainbow patterns, tie
dye, the American flag, etc. They are also made of a variety of materials, including Lycra, neoprene,
silicone or latex.
Swim caps have been used since ancient times. They were original constructed of waxed taffeta or silk,
and then the modern swim cap was born when rubber manufacturing was born in 1883. Back then, they
were used mainly for utility and the term “modern” is used loosely because they looked like aviator
helmets with chin straps. By the 1920s latex was introduced and swim caps, which has actually become
fashion accessories, fit more snuggly and were sold as part of swim wear outfits. Around 1940 or so,
swim caps regained their popularity with swimming icon Esther Williams.
To cap it all off, increased athletic performance ensures that swim caps will be around for a long, long
time. Today they are used primarily by swimmers, divers and surfers – made more popular – for reduced
drag and a subsequent competitive edge – in 1972 when gold medalist Mark Spitz hit the scene. And
hats off to swim caps for safety! They reduce hair entanglement accidents.