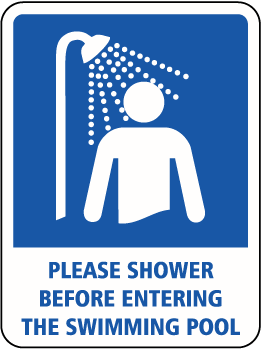 Should I shower before entering a pool?

If often seems that most people enter pool areas dry, probably feeling confident that they are fresh and clean. But even if you just showered that morning, chances are if you used a washroom that day, you could have tiny traces of fecal matter on your hands or the back of your legs that could help to contaminate a pool. The U.S. Centers for Disease Control and Prevention estimates that on average, people have about 0.14 grams of feces on their bottoms which can contaminate pool water.

One study the CDC did last summer found feces were frequently introduced into public pools. It collected water samples from numerous public pool filters and found 58 per cent of them tested positive for E. coli, which are bacteria normally found in feces.

Should I ask my guests to shower before going in my pool?

Many pool owners don’t feel comfortable asking guests to shower before they cannonball into the deep end, but they really should insist.

Just as we would be asked to do before going in a public pool, you should do that in a home pool. The same rules apply. Bacteria don’t see any difference between a public pool and backyard pool.

For pool owners, the best way to reduce the risk of bringing in nasty germs is by having everyone shower before entering the pool. What’s more, in the end, it will actually save a pool owner money. That’s because by showering off sweat, skin creams and sunscreens, the pool filtration system doesn’t have to work harder to keep the water clear and the pool owner won’t have to add as much chlorine.

It also reduces the load that the chlorine has to react to. Chlorine can be more efficient when it doesn’t have as much to break down.